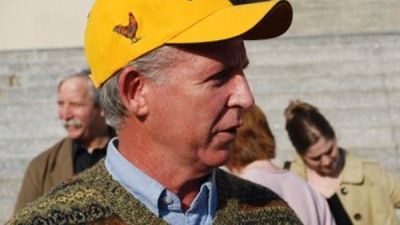 Today my heart is heavy for the Roswell Chicken Man, Andrew Wordes. His eviction date, after many pushbacks and set backs, is set for today, Tuesday February 21.

After many injunctions and attempts of injunctions, Andrew was refused a continuance when his attorney was not in attendance, despite the fact that the mortgage holder had appeared in court a total of ZERO times. The judge stated that this was the end of the line.

This, however, has not discouraged Mr. Wordes who has continued to reach out to friends, politicians and news outlets. Yesterday, Maggie Bean, a journalist for the Examiner, wrote a fabulous article on the trials and tribulations of Mr. Wordes fight and CBS also covered the story last night. Still, the fight goes on.

Local politicians have chosen not to get involved in fear of backlash. The Senator for the district has ceased his activism in the case. Roswell City Officials are responsible for this mess and the abhorrent public servants that could help don’t want to speak out ‘unless someone else does’. (read: useless) People are scared and won’t help Andrew…but YOU or I could be the next Roswell Chicken Man. Easily. Like I’ve said time and time again, we’re all one perceived violation away from where Andrew is. (And with the increased regulation of today, the idea is not so far-fetched.)

What Andrew needs now is public attention from a national media outlet. There is some fearless attorney out there that will take the bull (the City of Roswell) by the horns and legally annihilate them for what they have done. If you were in Andrew’s position, would you want to fight the good fight alone? The City of Roswell isn’t going to stop until Alpine Lane is green space and time is running out.

—-
For Chicken Man history, read the following Perspicacious Conservative articles from August 6th, August 14th  and November 23rd. You can also follow the cause on Facebook.