The President’s State of the Union is always painful to listen to, especially when we have a Democrat and everything is spend! spend! spend! I seriously wanted to smash the TV 85 times last night…once for every applause interruption. The only nice thing I can say is that Michelle Obama looked like she lost a couple pounds….which she needed to do. 🙂

The entire transcript can be found here. But let’s go through a few of his high (read:low) points:

“We gather tonight knowing that this generation of heroes has made the United States safer and more respected around the world”….heroes. Yes. Safer? Maybe. More respected? Doubtful. Over the course of the wars in Afghanistan and Iraq we have only alienated allies or caused conflict in other countries.

“Americans had a chance to share – the basic American promise that if you worked hard, you could do well enough to raise a family, own a home, send your kids to college, and put a little away for retirement.”
-This still happens today, under the same circumstances you state, Mr “0”…if you work hard.This country was not based on handouts and up until the New Deal legislation, millions of people made it on their own without the help of the government. You are given the chance, what you do with it is up to you and ONLY YOU.

“We can restore an economy where everyone gets a fair shot, everyone does their fair share, and everyone plays by the same set of rules.”
-We all know what he’s referring to….TAXES!! But his statement is ridiculous. If the goal is “fairness”, how is me paying a larger share of taxes for 20 people who don’t pay at all fair? How is my increased student loan interest fair when I will eventually pay more because others take the loans knowing they’ll never pay them back. How is it that my medical costs are higher even when I have insurance because they are overcompensating for the illegals who receive free care? THAT’S not fair and there’s nothing I can do about it (which is also not fair!).

“Ford is investing billions in U.S. plants and factories.”
-Not by any help from you O! They didn’t take the bailout money and they’ve always been dedicated to American values. Please don’t try and take credit for this.

“And if you want to relocate in a community that was hit hard when a factory left town, you should get help financing a new plant, equipment, or training for new workers.”
-Where is that money coming from? More subsidies? More taxes on the upper class?

He also announced the creation of the Trade Enforcement Unit and Financial Crimes Unit. Super. More units to do what other Departments are already designated to do (but won’t or can’t do)… Which in turn means more government jobs, more costs and more oversight.

Finally, and I’ve spoken about it before: higher education. “So let me put colleges and universities on notice: If you can’t stop tuition from going up, the funding you get from taxpayers will go down. Higher education can’t be a luxury – it’s an economic imperative that every family in America should be able to afford.”
-Not everyone is meant for college. Not everyone should have a higher education. Some are meant for trade schools and other focused jobs. This creates diversity. Giving away post-secondary education makes it less meaningful for those who work hard and pay for it. Also, The cost of tuition continues to rise because so much of it is subsidizes and reduced. What do you expect universities to do? They can’t operate for free. Next you’re going to tell me it’s important that everyone have a law degree, a Masters or a PH.D.

Basically, it was all a big campaign speech so while on the campaign trail, Obama can say “I TOLD REPUBLICANS TO DO _____ AND THEY DIDNT” or “America needs me to finish the job”. I can’t wait for the primary season to be over so that the nominee can debate and debate and debate Obama until he is blue in the face….because he hasn’t done squat. And the proof is everywhere. I do have confidence in his ability to be a one-term president. 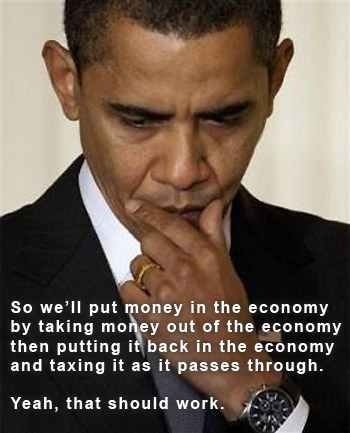 1 thought on “State of Ridiculousness”