Today I am mad as hell. Yesterday afternoon I found out that a candidate I voted for accepted money – A LOT OF MONEY- from one of my least favorite organizations. Like, THE WORST. The one that I dislike the most. The Anti-Liberty.

I’m a passionate person invested in politics so naturally my anger came seething from me in the form of clenched fists and brisk walks around the park. I wanted to yell, to stomp my feet and to quit. ‘This is so stupid!’, I thought to myself. ‘Why bother? Just stop paying attention, stop caring! Someone like me can never beat the game of money.’ And it happens all the time.

But I cant do that. Because the political world doesn’t stop- or even slow down- because I don’t like it. It doesn’t pause when I hiccup, or make the wrong choice. It doesn’t ease up when it seems like everyone around me is ‘selling out’ or when I feel like I’m riding a bike through two feet of peanut butter.

Charlie Harper once told me “This is an industry that is thankless, shallow, and soul crushing. It is designed to abuse the idealistic for the benefit of the soulless.” It’s probably the most honest statement anyone in politics has ever told me.

Politics is dirty. It’s filthy. It’s disheartening. People are mean. They lie. They stab you in the back. They say what they have to say and do what they have to do to get elected. They lose sight of why they were ‘doing it’ in the first place. They will be wrong. (You will be wrong!) They will let you down. (I can only think of two elected officials I know with certainty have never disappointed me. 2. Two. Dos.) That’s because everyone has their eye on the prize and rarely do those prizes look identical. And that’s okay.

So the days you want to give up, you absolutely should. You should go home to your family, or friends, or dogs, or a bottle of wine. Then, you should remind yourself why you’re doing it because at one point, there was a purity and a focus in you. You should take breaks and recharge, but never feel defeated. The system is the system. It will be broken whether you step up to the plate or not. You can either work within it (and it will run you over sometimes) or quit, but we all suffer every time one person drops out and stops articulating an opinion or fighting their own fight.

It doesn’t matter if you’re so Red, you’re already working on your “Draft Mitt Romney” Facebook page for 2016, or the Libertarian skipping every race on the ballot, or the Blue Dog donating to HillaryPac every day (just kidding- those folks don’t make money!).
The reality is that by playing the game in your own little way, somewhere along the line, while beating The Drum, you’ll change a heart and mind. You’ll lose some and you’ll win some, but you can’t say the same if you quit for good. So do quit. But just for the night. 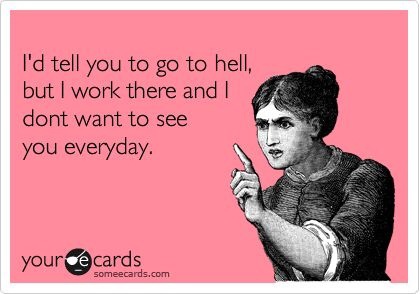 9 thoughts on “This Is Stupid”