In the bold tradition of Greg’s List, we choose not to endorse candidates for state office, we prefer the fine art of speculation, or predictions for Saturday’s Main Event…

Thousands of Republican activists, politicians, and candidates will descend on Athens, GA this weekend, with the goal of electing State officers and adopting resolutions for the next election cycle.

The Georgia Republican Party swept to a huge victory in November 2014 as the Democrat lily-white limosuine liberal ticket of US Senate candidate Michelle Nunn and Jimmy, er Jason Carter for Governor failed to resonate with voters and they were crushed by 8 point margins by Senator David Perdue and Governor Nathan Deal.

The GOP also swept every Constitutional office in the State, defeated John Barrow in Congressional District 12, and successfully defended several State Legislature seats from Democrat challengers.  In other words, it was a #blowout.

Following the success of these elections, most observers predicted a rather dull State convention process as there was no mandate for change in Leadership, at least at the November ballot box.

This dynamic changed rapidly though, as a dismal 2015 Legislative session manifested, a session that saw Republicans vote FOR tax increases while their Democrat counterparts voted AGAINST them.  (I’m still not sure how those insurgent Dems will ever face their constituents).  Dubbed the “Year of the Child”, the 2015 session was chock-full of heavy handed government regulations, new insurance mandates, taxes on businesses deemed scandalous, and, gasp, a $1 Billion tax increase (for Transportation) consisting of additional fuel taxes, hotel/motel taxes, and other “revenue increases.”

The additional taxes, regulations, and perceived cronyism enraged many Conservative activists, who looked to the State Party as a vehicle or medium to admonish Republican politicians that say one thing on the campaign trail and then vote opposite to their rhetoric once elected.

The frustration from the legislative session emboldened a slew of zealous candidates to announce their intentions to run for State office and challenge incumbents, who are likely surprised by the venomous fervor after what was widely viewed as a huge Republican victory in 2014.

Nearly every State office position is contested at the time of press, unfortunately published via Facebook and not the GregsListLive blog, which is suffering from website issues (thanksBlog.com!)

And now for the Predictions, which will include announced candidates, predicted winner, margin of victory percentage, and likelihood of additional candidates announcing at the Convention.  Once again, to reiterate, these are NOT endorsements, they are Predictions.  If you don’t like what I wrote, then please feel free to use your Constitutional right to Freedom of Speech and tell someone who gives a Rat’s ass (hint, not me).

An interesting matchup, as Padgett defeated Johnson in a runoff at the 2013 convention after Johnson garnered enough votes to knock off former

2nd Vice Chair BJ Van Gundy and force a runoff.  The 2015 campaign season hasn’t seen nearly the amount of debates and has actually picked up steam just during the past couple of months.  The Establishment backed Padgett boasts an impressive resume’ of wins and has strong legislative support while Johnson and his band of Merry Purgists, er Purists, seem to have a more enthusiastic voting base.

It’s a Tale of Two Mailers, as both Padgett and Johnson mailed full color direct mail pieces to Delegates and Alternates.  Padgett’s mailer shows photos of Gov. Deal, Sen. Perdue, and Congressman Rick Allen from GA 12 with the proclamation “Together We are Undefeated.”  The information side also highlights the amount of money raised, the employment levels, establishment of newly organized county parties, and increased Minority vote/engagement.

Johnson’s mailer shows a photo of Radio Talk Show host Erick Erickson, who has endorsed Johnson for Chair, and previews what Johnson “would” do if elected Chair.  I think this race will boil down to the difference between proven results and rhetorical promises.  Padgett will undoubtedly be the choice of the Nominating Committee, which holds weight at Conventions.  His proven track record and the power of the incumbency should provide him a comfortable margin of victory, Greg’s List predicts Padgett will garner 57% of the vote when matched up one on one with Johnson.

The likelihood of some last minute surprises in this race is extremely high as the temptation for some to grab their 15 minutes of fame may be irresistible, especially for the one issue/paranoid wing of the Party.  A rant against Agenda 21 is a distinct possibility.

*The Bob Mayzes “May-Vember” surprise email could swing a couple of points to Johnson but Greg’s List doesn’t think it will change the outcome.

2.  First Vice Chairman (Incumbent Michael McNeely vs. A Candidate to Be Named Later)

McNeely coasts to victory against Jesse “An email should suffice as a campaign” Sargent, the only announced challenger thus far.  McNeely swept to a huge victory in 2013 with no runoff required as he was matched up against two other challengers.  I don’t really see a last minute candidate in this race and predict McNeely will win with 90%+ of the vote.

3.  Second Vice Chairman (Open Seat as current 2nd VC Ron Johnson is running for the State Chair of the Under 80k Counties)

The two announced candidates at time of press are Debbie McCord, who is the current Secretary of the State Party, and Nate Porter, who was originally running for State Treasurer and then switched to 2nd Vice Chair.  McCord has been a stalwart in the State Party for many years now and would be difficult to beat even if a full campaign had been run, Greg’s List predicts she will get 75% of the vote in a head to head matchup against Porter.  The 2nd Vice Chair race does have the potential for last minute candidates, though not as likely as the Chairman race.

4.  State Treasurer (Open Seat as Bob Mayzes retired after 20 years of service, and Greg’s List thanks him for an impeccable record)

Two candidates have emerged, Mansell McCord and Brittany Marmol.  Greg’s List is actually predicting what many might feel is an upset in this race, as McCord boasts a very impressive resume’ of Republican leadership.  Marmol has been the Treasurer for the Gwinnett County GOP for the past couple of years and has been making an effort to get out and meet delegates and alternates.  In conversations I’ve had with folks from around the State, she has a surprising level of support from many outside the Cobb/Fulton Republican strongholds that will vote heavily for McCord.  In a close race, Greg’s List predicts Brittany Marmol as the winner by a 51%-49% margin.  Due to rules about the Treasurer’s education and experience levels, I don’t predict any other candidates to announce.

Two candidates have announced at time of press, Kirk Shook, who is currently the State GOP Assistant Secretary, and John Ferros, former Secretary of the Fulton County GOP.  While not exactly the incumbent, Shook will enjoy the ability to talk about serving the past two years as a State officer and is also from the Athens area which will help as a hometown candidates.  Ferros has sent out some emails detaling his plans to set up a Statewide Secretary council that will focus on implementing Roberts Rules of Order, an admirable missive, but not likely to be popular at a Convention which promises to be long and drawn out due to procedural manipulation of Roberts Rules of Order.

Shook wins with 65% of the vote.  There is certainly a chance for other candidates to emerge for this position as it is down ballot and will likely have far less total votes than previous races.

At time of press, Floyd County COP Chair Layla Shipman is the only announced candidate.  If no other candidate emerges, then Shipman will win “Kim Jong Un” style, with 100% of the vote.  Greg’s List predicts there will be other candidates because, Why the Hell not?  Shipman has been active in the Party for many years and Greg’s List predicts she will coast to victory once this election finally occurs. 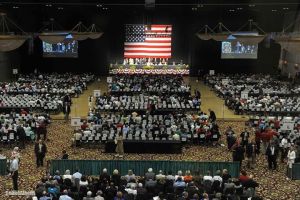