Yesterday, the Atlanta Journal-Constitution reported that the Confederate Memorial Day has quietly been removed from state calendars along with Robert E. Lee’s birthday. Both memorial days will now be referred to using a neutral term of ‘state holiday.’

While I’m not certain I support the elimination of memorial days that are, whether we like it or not, integral parts of our state history, I’m more disappointed by the fact that the elimination of the holiday has zero consequences for the employees.

Gov. Nathan Deal spokesman Brian Robinson said the state still intends to celebrate the days even if it doesn’t “spell it out by name.”

“There will be a state holiday on that day,” he said. “Those so inclined can observe Confederate Memorial Day and remember those who died in that conflict.”

Democrat legislators, liberal groups around the state (and nation), and even some employees have long been lobbying for their Confederate-based state-recognized paid days off to be eliminated – at least the language of the holidays.

This decision is solely in the hands of the Governor until the Georgia legislature passes something concrete and permanent, and based on Deal’s most recent announcement, it seems those holidays will cease to exist as the history books now read. As for the state employees…they will still have their paid day off.

Here’s how this works: If you aren’t going to recognize the day for what it really means, it isn’t necessary to give state employees a day off. We close banks and government agencies for MLK Jr. Day, New Year’s Day, and Christmas, and we formally recognize the Holocaust Memorial Day and President’s Day. George Washington’s Birthday and Lincoln’s Birthday are all on various calendars. They’re on the calendar because they represent an era or person in history.

History shouldn’t just be erased because of knee-jerk reactions from public dissent. More thought should have been put into this issue. A loud minority is clamoring about the existence of Confederate holidays, memorials, statues, and figureheads and managed to become loud enough for the Governor to hear on this one. Action was taken, and will likely continue to be taken. But it should be done slowly and it should be evaluated for what it is.

Now, something deemed “terrible” was removed from a written calendar, disguised as something else, and used as a reward for employees.

You don’t get to have your cake and eat it, too. Either recognize the memorial days for what they are and give the employees their paid time off, or don’t. Please don’t play puppeteer. .

Photos below courtesy of the Atlanta Journal-Constitution: 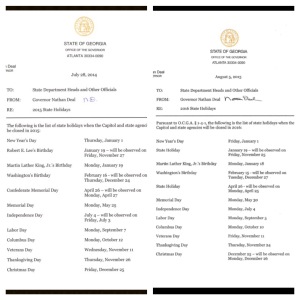