After the recent Braves debacle, and yes, regardless of what side you were on, it truly was a debacle, regionalism has once again been brought to the forefront in our state. Unfortunately, most people don’t understand regionalism, if they’ve even heard of it before. They fail to see the unconstitutional premise of the initiative and the failed outcomes stemming from the increased level of bureaucracy and unaccountability.

The concept of regionalism, while the term seems rather self-explanatory, is actually quite complex due to its continuous evolution. Beginning in 1998, legislators began working to formally structure government on a regional level by implementing HB 1650 and establishing a 21-member Regional Advisory Council (RAC) which was refined with different ‘region lines’ the following year. In 2008, the legislature, through HB 1216, again reorganized and divided our state into 12 regions with elected and appointed representatives which were to be limited to one county commission chair and one mayor for from each region. In 2010, this project was expanded by HB 277 to include another 12 regional transportation councils which would have taxing authority and eminent domain privileges and a self-selected executive round table. In addition, a citizen review panel is appointed for each region, yet they have little authority to control the actions of the councils or roundtable. The Atlanta Regional Commission, known as ARC, was created on the premise of uniting 10 metro counties and is now the trailblazer for many of the tragic development projects we hear about every year in Georgia and dates back to 1947 but has evolved significantly since. 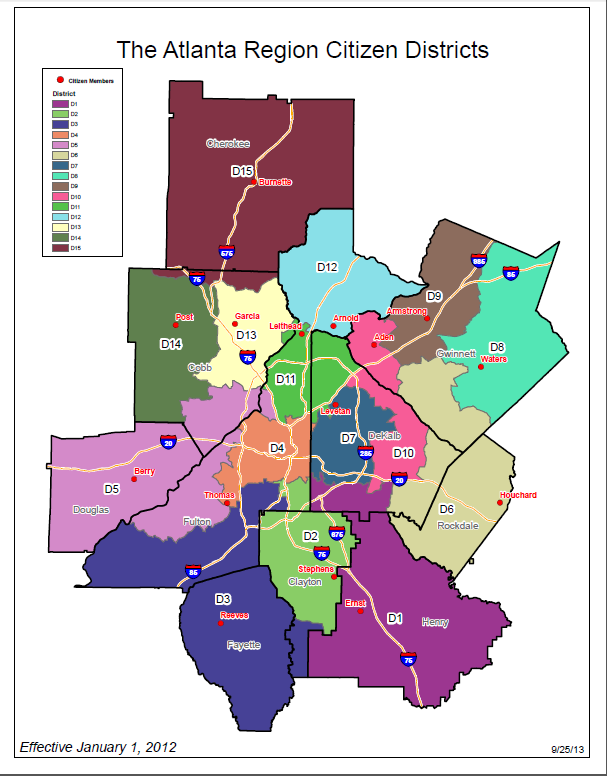 Sure is pretty, isn’t it?

It’s true that most people support counties working together and it’s true that most counties enjoy ‘sharing’ costs. It’s also true that many voters want to see their elected officials working as zealous advocates for their communities. But most wouldn’t support the concept if they knew it was mandated and involuntary. Counties are forced to work together to support initiatives and share funds that may never offer any benefit to their citizens or businesses. Essentially, regionalism reduces local control, circumvents the Georgia Constitution (Article IV, Section IV), reduces (and sometimes eliminates) transparency, diminishes accountability, redistributes wealth, creates an unnecessary [4th] level of bureaucracy and applies a one-size-fits-all approach to development that allows appointed members of a board to evade the whole ‘representative’ aspect of governing. Elected officials bring in vested ‘friends’ as appointees and the commission quickly becomes a one-way (light-rail, of course) train headed to Spendersville at our expense.

“We have a significant number of “citizen” members on the ARC Board who have absolutely no accountability to the voting public at all,” says Fayette County Commission Chairman Steve Brown. “The thought of a mandated regional governance and taxation structure producing the likes of the regional T-SPLOST and Concept 3, by unanimous votes, no less, is a worrisome proposition.”

Regionalism isn’t all that popular, either- mostly because Georgia cannot execute the necessary engines, if you will, correctly. Maria Saporta of Maria’s Metro (who is very pro-transportation spending) recently said, “Regionalism is about investing in regional assets that serve the entire 10-county or 20-county region”. While this, like most things, sounds like a sound solution to so many local problems, regionalism requires county participation and an intermixing of funds that most taxpayers don’t even know about. It allows governance by an unelected, unchecked board with no recourse for voters, citizens or taxpayers.

Earlier this year, the GA GOP voted in favor of a resolution rejecting regionalism as a whole and supporting legislation that would repeal applicable measures. Americans for Prosperity has shed a critical light on issues surrounding regionalism and their own Matt Roy summed up an exemplary explanatory article asking, “When has more or bigger government resulted in an efficient outcome?”

Proposed remedies are lacking. Representative Ed Setzler currently has HB 195 in the hopper, which allows regionally cohesive projects without the mandate by allowing forthcoming initiatives to be at the discretion of the voters in the affected counties. Cooperation would no longer be mandatory, and elected officials would again be accountable to the people who elected them to work on projects that are in the best interest of their area. Wouldn’t that have been nice with the Braves stadium? And wasn’t that a more representative way to decide the fate of the T-SPLOST?

We don’t need regionalism. We see often why these things don’t work. A government close to home is the most effective, the most accessible and the most responsive. It’s the same reason the states don’t team up by region to accomplish things. Cooperation isn’t a bad thing and as Andre Jackson of the AJC stated, “Such cooperation where it’s mutually desired is in keeping with current best practices”. Arranged marriages are nice, but everyone usually ends up happier when you get to pick your own spouse.