Unless you live in the stone age, you probably hear this term daily, but the majority of people associate it with the lazy working class of twenty-somethings who likely have no direction in life and whom also lack respect for anyone who would identify as a baby boomer. Don’t lie. You know that’s how you think of us. Those kids you don’t want on your lawn.
But we are an integral part of the political game. As cliché as it sounds, we are the future and at some point, the baby boomers will have to stop shunning us. We see the world differently, but somewhere in the mix of labeling and the desire to be right because you’re older, you stopped listening and wrote us off as “not conservative enough”.

Allow me to offer a few examples.

Immigration
Last week, I attended a Peach Pundit Immigration forum where the diverse panel actually included ‘one of us’. Chairman of the Georgia College Republicans, Will Kremer, made a point that resonated with me immensely. “When you talk about immigration reform, and you refer to these people as ‘invaders’, it turns us off. We grew up with these people, we went to school with them.”
It’s true. Right, wrong or indifferent, current protocol puts these children, sometimes anchor babies, in school with us millennials and so we don’t see them or their families as the delinquents society is painting them to be. We see them as humans first. It doesn’t mean we don’t want tighter immigration policy, that we don’t want to secure the border or enforce the laws on the books. Maybe our view could open your mind a little bit when it comes to discussion because we see it differently.

Next, consider gay marriage. I challenge you to find one millennial -liberal, conservative, libertarian or independent who lists gay marriage as their number one issue. I would put money on the fact that it isn’t even in the top 5. You think it’s the demise of our country, we care about our national debt, the student loan crisis and whether or not we will have a job post-college/grad school. We may have our personal views on it, but it’s not what’s driving us to the polls. 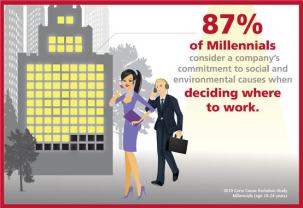 Also, we don’t see the over-criminalization of drugs as an abuse of power because we are all a bunch of pot heads. We see it for what it is: a pathway of destroying lives of youthful and first time offenders who will likely never “re-offend.” This has become a taboo talking point. Stop shutting us down as druggie good-for-nothings because we don’t think a marijuana offense should ruin a career path. We just see it differently.
Finally, we don’t really like war. Not because we don’t want the strongest military in the world or we’re any less patriotic, but because as a nation, we choose poorly and you’re going to die and we will have to pay for it. And much to your denial, we are pro-life.

I’m not saying that millennials are right about everything. Most of us know we still have a lot to learn. But our hearts and minds are still open so we see things differently. We grew up differently. We have a different level of compassion and we have different reasons for supporting candidates. We tend to pick issues over party affiliation, but only because you’re alienating us. We aren’t going anywhere, I promise, so we at least deserve a seat at the table.