It really frustrates me when people over-analyze product advertisements.  If you read ‘Who Isn’t Looking Past Color’, then you may have a little insight as to how a small and unintentional aspects of an ad may be so misconstrued by activist groups that companies end up cycling them out of use.  They are at it again.

Recently, the ‘Got Milk’ ads were overtaken by a new strategy: Milk can help reduce the symptoms of PMS.  Whether there is any truth to it or not, the controversial ad (which, as a lady, I find hilarious) has really stirred the pot with feminists.  The ad shows a middle-aged man holding several cartons of milk, apologizing for ‘listening’ and uses a line some women use often.  Feminist groups are claiming that the ad is sexist.  Well, I have some news, ladies.  PMS is exclusive to women and the ad is funny.  And sexist how? There are scientific facts to back up not only the “issue” but also the reduction of symptoms  It’s catchy, new and has sparked a lot of chatter–the intent of the ad.  Are you going to boycott milk because of the ad? (Because I could think of a lot more reasons to boycott milk,but that’s another day). 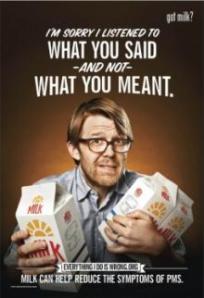 Feminist groups just can’t help themselves.  Do you remember the controversial Folgers ad a few years back? The television commercial shows a young girl drinking coffee at the breakfast table when her dad comes down to scold her for being out too late with her boyfriend. She flashes a new engagement ring and implies that her staying out too late will no longer be a problem. Feminists claimed the ad was too old school, insinuating that a woman would go from the care of her father straight to the care of her husband-to-be was sexist. I would never gather this from the commercial. Who the heck thinks like this??? 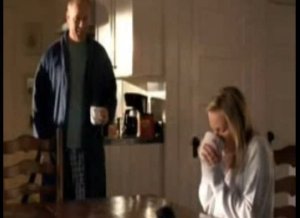 You can watch the commercial here : http://www.youtube.com/watch?v=d5lPYUB2_ww

Or how about this one:

I absolutely won’t deny that this ad is over the top (but that’s to be expected in the fashion industry) and I certainly wouldn’t want to see it in a magazine directed at youth, but…women’s rights groups have stated that the ad is a “Rape Fantasy”.  Pardon?

The thing is, you don’t see men over 50 shouting about the men depicted in Viagra commercials, nor do you see elderly people rising up against commercials for HoverRound Scooters. If you don’t like an advertising strategy, don’t use the product. And let’s be honest, corporations aren’t that stupid.  They are out there for one thing: a profit.  Offending you and shunning you from the demographic that purchases whatever they may be selling is, surprisingly, not their goal. Realize this. And quit flooding the news circuits with complaints about how and why you THINK a company is maybe trying to POSSIBLY advertise their product.  If you want to be offended, then look into the AshleyMadison.com commercials (Life is short. Have an Affair) or the ‘Aids is a Mass Murderer’ ad campaign.  Maybe these other ones don’t see so bad?