The Perspicacious Conservative is starting a new feature! A Person Of the Week that did something that deserves a Wow!, thus the PC POW WOW! I can’t think of a better person to begin the feature with than Mayor-Elect David Belle Isle!

David sprung out of the gates in February at his kick-off party and never stopped running. Knocking on doors (I believe he covered ~2,500), speaking to community groups, debates, making phone calls, attending Meet & Greet’s hosted by generous members of the community, and everything else, David never stopped. 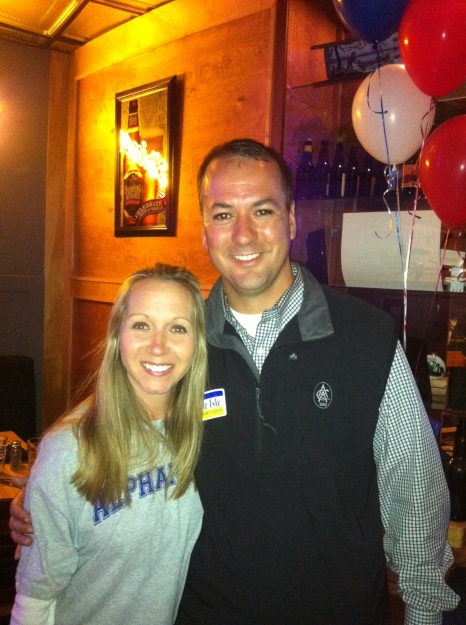 Running for public office isn’t easy. It takes dedication, time and sacrifice. David’s family and circle of friends are second to none. Candice is one of the best wives I’ve ever seen. That woman ran the office, the campaign and the household. I know her journey through this campaign was anything but easy but her positive attitude kept us all going when things would hit the fan.

It seemed in the final 96 hours of the race, opponents made last ditch efforts -fueled by panic- to try to destroy David. It didn’t work. David and his campaign kept the faith and powered through and it paid off. The best man for the job was elected!

I’ve never seen someone have such a wonderful following of volunteers. Like I said in ‘Why Belle Isle is the Best Choice’, everywhere David goes, he has support. From the initial kick-off party at the Old Blinde Dog, to the people standing at the polls to call in results to Smoke Jack (and the plethora of events in between) people showed with their shirts, their smiles and their support. As the person who coordinated these people over the course of the campaign, I couldn’t be more grateful.

It has been a true blessing to work for David during his campaign over the last eleven months. It’s been inspiring to take part in a campaign that ALWAYS took the high road and never slung mud. David’s family is a joy to work with and I am thrilled, elated and so-darn-happy that he will soon be the Mayor of Alpharetta, Georgia!! I can’t wait to see his wonderful journey as Mayor begin!

3 thoughts on “Person of the Week: David Belle Isle”