I never really feel bad for victims of political mudslinging because running for any political office is not only a family decision but a privilege. So in the recent months of primary candidates spouses at the forefront of so many new articles, I have to ask: What is the role of the spouse of a political candidate?

We’ve all heard the recent annihilations of Karen Santorum with her anti-torte reform chiropractic lawsuit and her abortion-performing lover of her twenties. We’ve seen Callista Gingrich painted as ‘The Other Woman‘: classless and unfit for the White House and everyone anxiously awaited Gloria Cain’s response after reports of harassment and infidelity broke. And no one can deny the role that Marcus Bachmann’s pyschological clinic played in the demise of Michelle’s campaign.

So how much is too much? How heavily should we weigh the decisions, actions and lifestyles of spouses? I think it’s a really tricky question that I may not necessarily know how to answer. I don’t like Michelle Obama for a number of reasons but how big of a role should that play into my perspective of Baracks candidacy? Should we strike Rick Santorum as a potential Republican candidate because his wife was pro-choice in her earlier, pre-Rick life? Should we discredit Newt’s positive points because his ex-wife claimed he wanted an open marriage?

My concern is that the issue is a double-edged sword. I try to remind myself that the spouse isn’t running for office and if elected, said person will be surrounded by informed staff to help in decision making. But if you consider a typical family, so many choices are made as a team. At some point, I have to wonder how much influence a spouse could have over decisions and policy issues. Or more…does the spouse represent the true feelings of their political counterpart and they just publicly state otherwise? It’s a very fine line.

What I do find fascinating is the Bill Clinton effect on Hilary’s campaign. It was almost nonexistent. I’m not sure if people were just unwilling to beat a dead horse, if they thought Hilary was a strong enough woman to remain unaffected herself or of they simply didn’t care.

I think the lucky candidates are the ones whose wives (or husbands) don’t have a murky past or aren’t currently doing something controversial (I.e. Marcus Bachmann). Sure, the other candidates will look to dig up dirt wherever they can, but it often begins as a distraction effort and then spirals out of control and divert attention away from other things happening in the campaign. It’s certainly ridiculous to consider a spouse’s actions prior to a marriage when evaluating a candidate.

Teresa Heinz Kerry was at the center of the media in 2004 because her late first husband was a Republican and John McCain had a VERY outspoken daughter. Neither of these instances had significant impact on the ultimate direction of the campaign but they were nice distractions at the time.

Unfortunately, the media plays a strong role during election season in deciding what we see and hear about. I ask that you refrain from letting your own personal opinion of each candidate interfere with your evaluation of the role of the spouse and vis versa. I would also ask that you ignore the media reports pertaining to spouses and stay focused on the candidates that are so eager to distract and deceive you. 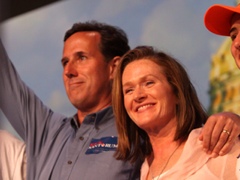