Am I on an episode of punk’d? No, seriously. Am I?
Newly elected State Rep. Sam Moore has introduced legislation that would eliminate the crime of loitering in the State of Georgia, remove circumstances in which citizens would need to identify themselves to law enforcement officers, (as it stands now, you must provide identifying information, even if it is only a first-tier encounter) and also amend circumstances for convicted sex offenders. 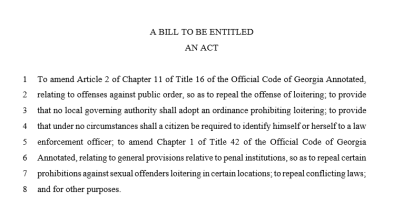 The problem, which has just about everyone up in arms, is here:

Because loitering would no longer be enforceable, law enforcement would be unable to prohibit convicted sex offenders from “hanging” where minors congregate.

This is because the proper time and care of educating and informing the public on WHY the issue is important to Rep. Moore and his cause, and also what the potential ramifications are, were not given. Instead, this bill drops, Moore comes out swinging in defense of his bill and everyone is screaming he hates children.

As a staunch advocate of Liberty and a person who understands the true brokenness of the criminal justice system, this is a terrible, awful, up-to-no good bill– not necessarily because of the intent, but because of the ramifications and because we have now prohibited civil discourse.

Loitering – if not on private property- probably shouldn’t be a crime. It’s harmless for most and generally applies to bored teens in bagging jeans. But how do you handle the sexual registry aspect that pertains to loitering? We argue that parents have a reasonable expectation that their children will be safe when they send them to school. It’s why we hate gun-free zones. It’s why we support armed teachers in schools. If this is an attack on Republicans and conservatives who don’t necessarily support criminal justice system reforms, this is wrong.  If this is an attempt to make Republican colleagues look less conservative, this is wrong. If our goal is to protect life, liberty and the pursuit of happiness for all, how do you circumvent the issue of protecting those who cannot protect themselves? I don’t say this often, but I do find this to be one of those special times where perhaps an alternative measure should be implemented, but at a minimum, prepared.

Let’s also talk about the national stage. What happens when someone not familiar with the Georgia Liberty movement, like oh say CNN, picks this and blasts headlines about Republicans in Georgia who want to allow convicted sex  offenders to be around children?  Take a look at the headline from the Cherokee Tribune. Unfortunately, now the environment is too volatile and hostile for the community, and fellow legislators, to have the conversation about this legislation.

2 thoughts on “Loitering on Punk’d”